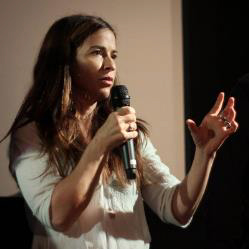 Too Loud a Solitude

Vice Chair Genevieve Anderson is an artist, filmmaker and producer, making sculptures and narrative films with puppets. Driven by her fascination of the human interior, she gives form to this inner realm through the unique potential of the puppet body and the puppet figure as a distillation of being: an avatar of the interior. Reflecting this vision in her film work, Genevieve endeavors to create simple, human stories mining the delicate interior worlds puppets inhabit. Her five short films have played at festivals worldwide and have garnered awards in Berlin, Chicago, Seattle, Palm Springs and Rhode Island, among others, and have been broadcast on IFC (US) and ARTE (France, Germany). Her figural sculptures have sold in galleries in Los Angeles, CA and Tubac, AZ. A recent recipient of the New Works Grant from the Tucson Arts Commission, Genevieve is currently working on a project exploring artificial intelligence and the creative impulse. Compelled by the relationship between humans and technology, she also explores the topic in academic essays and blogs. Genevive is a Rockefeller Media Arts Grant recipient and an Annenberg Fellow. She has a BFA from UCSB and an MA in Critical Studies from the USC School of Cinematic Arts. As producer for the world-renowned video artist Bill Viola, she helped create content for numerous venues such as the Venice Biennale, St. Paul Cathedral, London, and Hamad International Airport, Qatar. She adores roadside carnivals and is a keen hoarder of scrap metal, bones and interesting old junk. Her most recent film, Dustwun, was released in 2020.